Recently been struggling with my paint brushes…they were on their last legs.

………….worse they weren’t even that old…like most people I use a mix of brushes…mainly GW because they were moderately easy to get hold of……but i was very unhappy about the last few i purchased….they aren’t even formed into a point any more so why they bother putting those little covers over them i don’t know, what exactly are they trying to protect?

Anyway I had them all out at the sales desk and grabbed the least splayed out brush…but sadly it really wasn’t fit for purpose and i shouldn’t have bought it….To be honest they make rather expensive stirrers, but i wouldn’t bother trying to paint anything with them……..

…….I got so fed up with trying to get the tip of the GW brush into a point that the other day I just binned it and decided to ask my friends for ideas……several of them mentioned a company I had not heard of before, Rosemary and co  I decided to check them out.

They had quite a range of brushes and some very good prices, pretty much a brush for everything,  so i selected a few to be getting on with and waited for them to turn up.

They arrived very promptly and I immediately set about using them. Have to say i was moved to words!   Not often that happens with tools, but perhaps it should.  The brushes i selected , it has to be said, are amazing.  They have a nice firm point, and sit very comfortably in your hand, especially the synthetic series.

I would recommend that you make your next brush a Rosemary & Co brush…..it’s really the only place i’ll be getting mine from this time on. 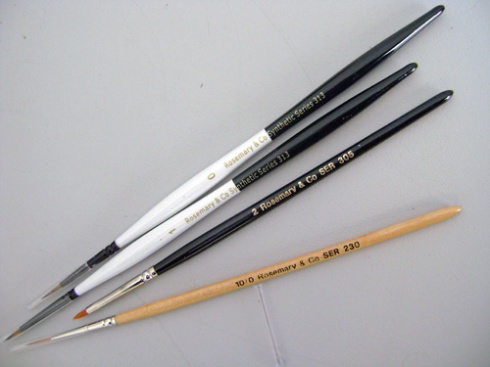