I have been rather busy around the house with a major D.I.Y. effort which is on going, so it limits my time on scenery production at the moment.

However, I have managed to bang out my own 2 sets (of 10 pieces) of Asteroid Fields, basing them on clear flying bases for a change.

Now, I have to say, scenery is one of those things that sometimes doesn’t get as much time or effort spent on it as perhaps it deserves. But nice scenery enhances the battlefield and compliments all that time spent on your armies/fleets in my opinion, so with this in mind i went the extra mile with my Asteroid fields.

I not only based my rocks but painted and highlighted them and the effect compared to the the bare rock is remarkable. The multi faceted surface of the rocks I was using were perfect to be picked out with a paint brush,  they now look in scale with the ships, rather than lumps of rock stuck on stands!

I have to say i am very impressed with my efforts they turned out better than i was expecting.  I know not everyone has the time or inclination to paint rocks, which is why I will be selling based and painted asteroid sets very soon. (keep checking back..next few days will see the first limited sets of 10 available)

Since part of my game will be resources based…..I decided to paint up a few Rocks in order to give the mining craft something to harvest…….so I have some very nice Gold,  Green (Krypton???hahahahha) and Blue asteroids….The Gold ones look just like nuggets!!!! If only!!!! 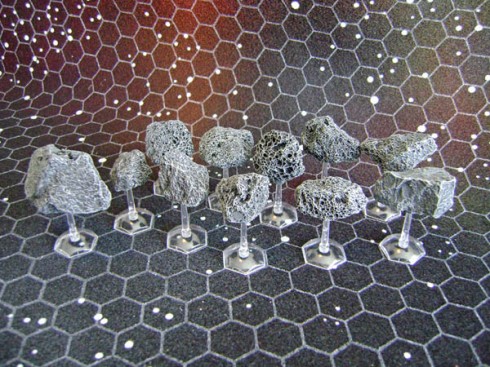 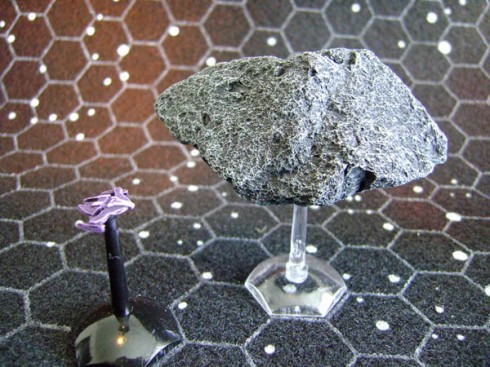 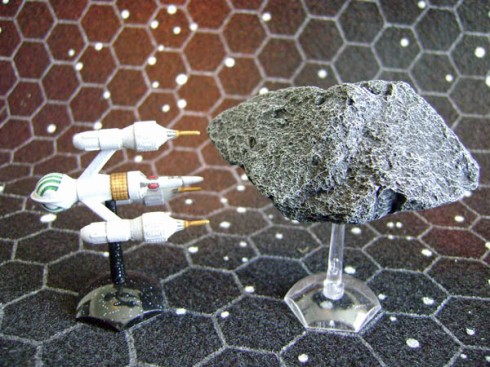 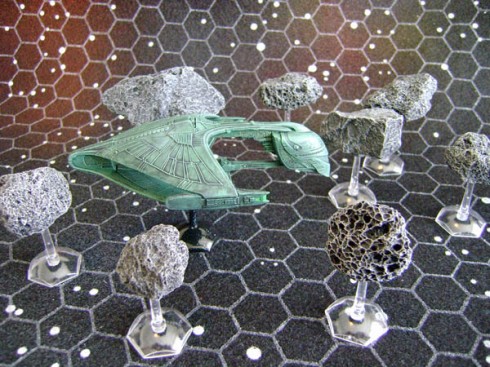 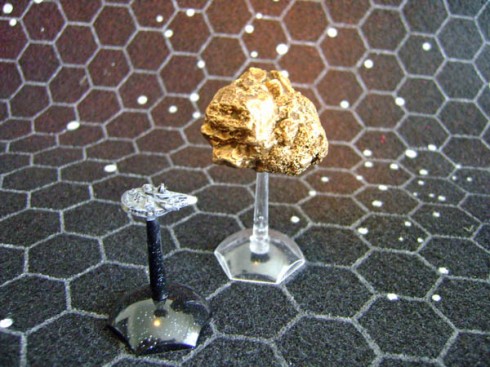 Having nearly completed my Fleets it is time to think about the Rules…as you know I had intended to write my own rule set because…well that’s the way I am!!!!

But I stumbled across Mateus’ Blog “My Ever Growing Fleets” the other week, and i was so taken with what he has done, that I decided to adopt his rules “Pax Stellarum”  for my game.

If you click on the link it will take you to his Blog where you will find details , in the top right hand corner is a link that will take you to his published rules when they are completed. It looks and sounds very good, and ideal for my purposes.
I still have a little longer before they are complete…or at least published (he has play tested them so they are quite advanced) but this does give me time to finish off my fleets and sort out the scenery!

As mentioned, during last week I recieved my package from  Ender at S.A. With my 2 Klingon Negh’Var ships…….it took a little bit longer to finish them (due to other projects) I decided that I needed a Flagship for my Klingon Fleet and this gave the option to try out a different colour scheme for one of them. I was rather taken witha  Blue scheme I had seen on another Captains fleet! So i tried to apply this process to the Negh’Var…although it didn’t turn out quite the same,  I am very pleased with the results. The Negh’Vars have some nice detail and most importantly are correct scale for my other ships (1/7000) So their impressive size is evident when along side other vessels.

For now at least the arrival of these two ships marks the end of the Klingon Fleets expansion!

My Work Bench has a lot of Star Fleet ships awaiting attention and 4 more Jem’Hadar vessels ar on their way to boost the Dominions force……and lastly a Battlestar from the original series, together with it’s own wing of Vipers will be the last vessels in this round of ship building!

At which point i must focus on getting the game played! 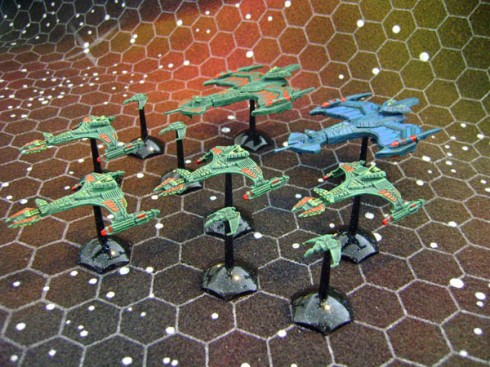 With HeroClix Vor’Cha for scale

With a Nebula Class Starship (HeroClix)

With the Liberator DSV2 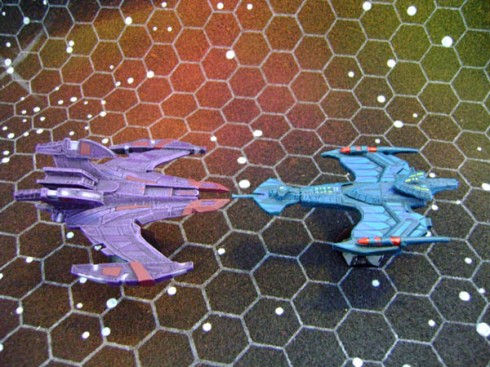 The Battle cruiser is a Resin garage kit, so you’ll need some modelling skills to complete it. Parts had a little flash, the occasional hole, which required a bit of tidying up, but then that is the case with all the resin kits I have ever made, and no problem at all!

Went together well, needed a bit of Liquid Green stuff, then gave it an under coat whilst I worked out what colours to use.

Although I saw most episodes of DS9 I managed to miss the battlecruiser…..(there are a few complete series i need to purchase!) I was taken with Jack’s (from S.A.) completed ship  and decided that Purple would be the colour for my Jem ‘Hadar Ships. It would make them stand out amongst all the green and grey!

So my take on the paint job  were a mix of the official studio model colours and Jack’s.  I used a lot of layers of dry brushing on Both the Battle Cruiser and the little Attack Craft.  I am very pleased with the result.  So that’s another alien race into the melting pot! The S.A. Negh ‘Var’s for the Klingons also arrived today they are currently in soak in soapy water! hoping to get them done in the next few days….So Stay Tuned! 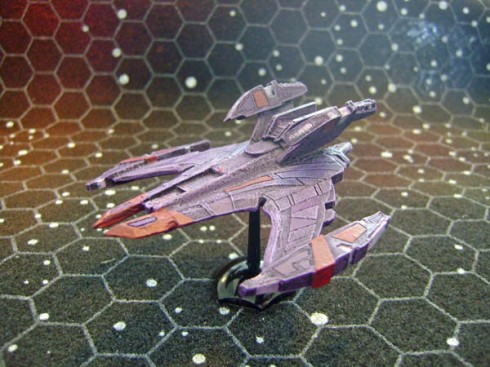 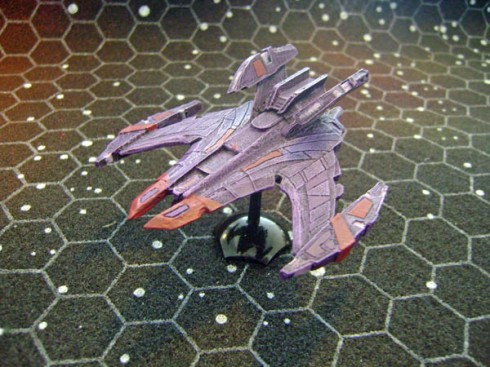 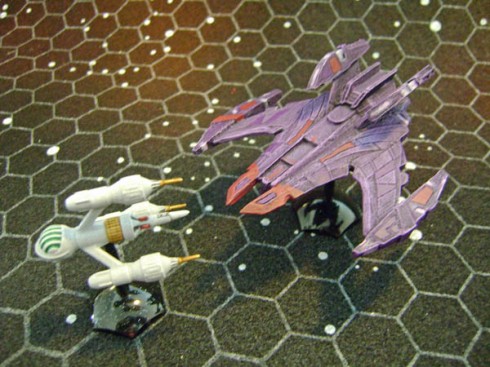 For Scale with The Liberator DSV2 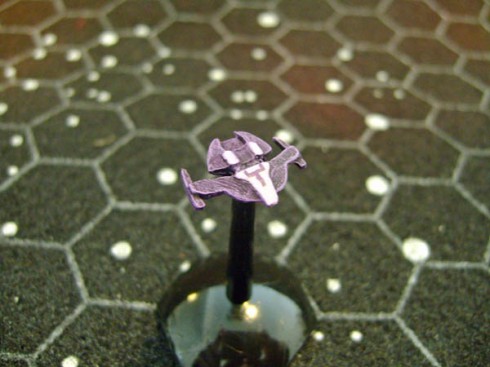 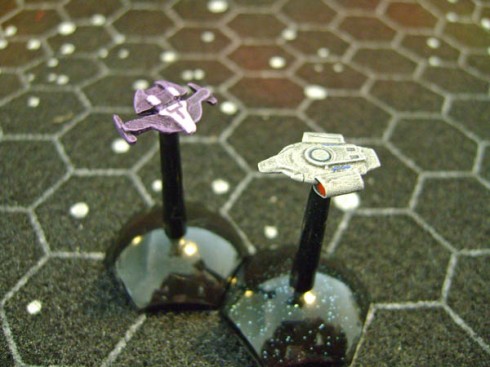 Romulans….I really like their ships, the problem is not all that easy to get many classes of Romulan ships, and those that you can get aren’t available in fleet scale.

I very nearly caved and was about to purchase some micro machine Warbirds, Furuta also produce one, but neither is that big. The thing is The warbird is an immense size compared to virtually all other ships in the Star trek universe, so i wanted something that looked like it was going to be as close as i could make it to 1/7000. For a while it seemed the only option in terms of a larger ship was the Ertl Model kit….but this was sadly twice the size it should be and at £30+ each not really an option. I then started to take note of something I kept seeing on my Ebay searches….A Christmas tree decoration from 1995 by Hallmark. It turned out to be 5.5 inches long….it was around 1/8000 scale so that was close enough! You’ll need to pull out the hanging eye/hook, and also snip off the cable that would connect to your US christmas tree decorations light system!

I then tucked up the remainder of the cable and filled the hole with green stuff (it’s on the underside) before repainting. I may need another one so please remember to save one for me!!!!!

………then I also noticed that Star Trek.com/eaglemoss  warbird also produced a rather detailed model…I purchased one of those as well (click on link above)….it turned out to be a tiny bit smaller than the hallmark version so I have changed it’s class, as it is too good not to use.

My other vessels are Talon Scout ships from the magnificent Starship adversaries  and a couple of non canon Star trek Romulan vessels from sellers on Shapeways Romulan type ship 1 “Delon Kelahri” and Romulan type ship 2 “Dragohawk” there are others but i liked the look of these. 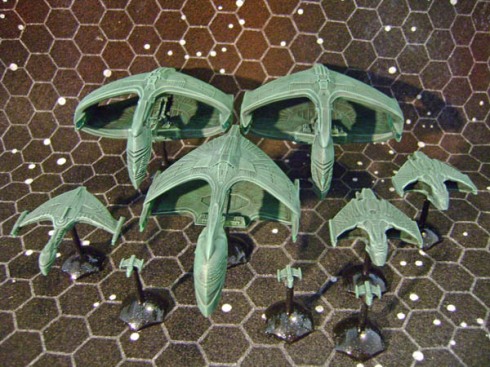 ….and just for fun, Warbird and Liberator DSV2

Here is my Klingon Fleet, nearly complete.  I’m waiting for a couple of Negh’ Var’s to arrive from Starship adversaries

My Fleet is made up from repainted 4x Heroclix Vor Cha Ships and 4 Klingon Birds of Prey from Bergstrom which is a very nice little model, and more to the point the correct scale for a Bird of Prey. 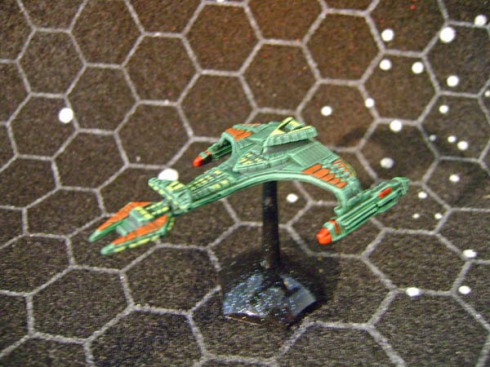 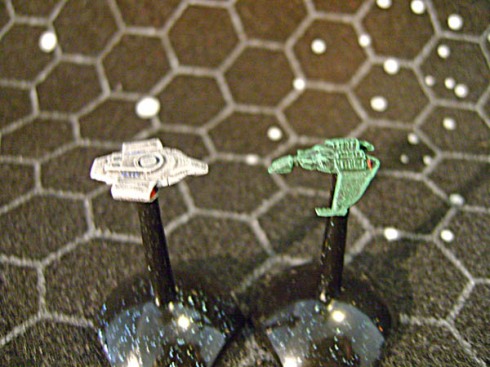 Latest additions to my Imperial Fleet, The 160km Death Star II which was a gift from my Brother who had been collecting A Star Wars magazine series a few years back…this was one of the models available and it fits in nicely with what I’m doing.

Straight out of the box, and not repainted

My Second order at Bergstrom was for some Fighters etc so my Imperial Star Destroyer, also from Bergstrom had an air group!!

The Fighters are fantastic and I shall go back for more, being small they are extremely difficult to paint, but dry brushing over black was really the only answer…and it works well. Firstly with a light grey then a white.

This is Darth Vaders X1 Fighter!

Standard TIE Fighters….at the moment I only have two groups of three, but will likely get several more Squdrons. 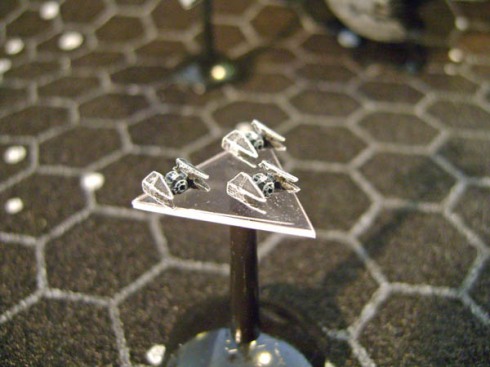 One squdron of  TIE Interceptors 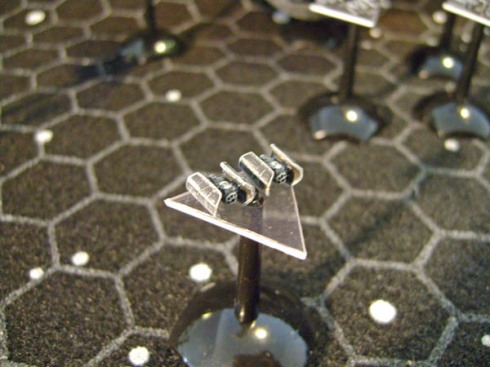 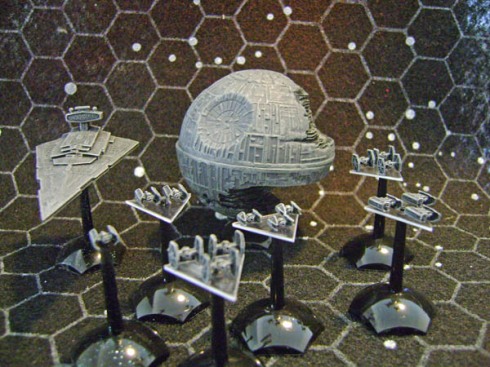